Despite agriculture’s importance to US trade and foreign policy, Donald Trump and Hilary Clinton are yet to discuss their stances on many agricultural issues.  Last Wednesday, agricultural representatives from each campaign discussed these topics, ranging from lower tax rates for farmers to improved rural broadband access. The two hour debate can be heard, in it’s entirety, here. 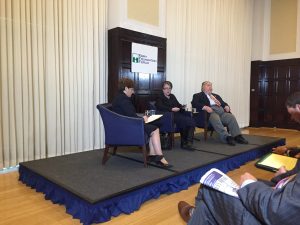 Sam Clovis, an Iowa farmer and co-chair of the Trump campaign, represented the Trump campaign, while Kathleen Merrigan, a former Deputy Secretary of Agriculture, represented the Clinton campaign.  The discussion largely focused on key agricultural challenges.  Such discussion is particularly timely, as it is unclear who will replace the current Agriculture Secretary, Tom Vilsak, in the next administration.

Dr. Clovis prioritized rolling back regulations, particularly through reducing authorities of federal agencies, such as the EPA, USDA, BLM, and FDA.  Clovis also argued that consolidation in the agricultural sector can largely be attributed to regulation.  While regulations may play some role in consolidation, economies of scale play a much greater role in consolidation through lowering costs.  A larger firm, on average, experiences lower average cost of production.  Such cost advantages are likely the dominant reason for consolidation.

Although Dr. Merrigan did not discuss specific regulations, she focused on improving existing regulation.  As a former Deputy Secretary of Agriculture, she demonstrated greater confidence in the ability of federal agencies to have meaningful, positive impacts on agriculture.  Dr. Merrigan also emphasized investing in new famers, arguing that the next administration should double the funding for new and beginning farmer programs. These programs were recently discussed here.

Drs. Clovis and Merrigan also agreed on a number of issues.  First, they would both like to tie nutrition and commodity programs together in the upcoming farm bill, which is likely to result in a more timely passage of the bill.  Second, they agreed to maintain the current nutrition program, arguing that outlays in the program would naturally decrease as the economy improved.  Third, they would both like to avoid a “one-size-fits-all” approach to agriculture.  To that end, they stressed the importance of approaching natural resource and regulatory issues with regional emphasis.

Finally, they both agreed that they would not support the current Trans Pacific Partnership (TPP), on which I recently wrote a blog post.  When pushed on what specific aspects needed to be changed to make the TPP a viable trade deal (a question from yours truly), they replied with similar criticisms.  Merrigan argues that the TPP doesn’t currently pass Clinton’s “litmus test” for any trade deal, which includes the following parameters: (1) does the deal lead to net positive job growth? (2) does it increase incomes in America? (3) does it enhance national security?  While it is unclear which of these criteria the current TPP agreement fails under Clinton’s litmus test, Clovis lamented the TPP’s lack of transparency and the apparent asymmetries in trade.  Clovis also mentioned that the United States should not trade with countries that “come out of the chute with a comparative advantage.”

Notwithstanding last week’s discussion, agricultural decisions in Washington have a long history of bi-partisan support.  This trend should continue into the next administration.  While the agricultural administration will change in the new year, its focus and emphasis does not appear to be substantially different from those of our current administration.  Of more importance, perhaps, is the leadership of the House and Senate agricultural committees, which are determined based on majorities in those chambers.  Stay tuned.