Last month the Northwest Power and Conservation Council released an update of their “Northwest Power Plan”, a 20-year roadmap for meeting the electricity needs of Montana, Idaho, Washington and Oregon. A previous version of this plan warned that coal plant retirements raised the risk of blackouts in the region. But this update calls for much heavier investment in renewable power generation, and is much more sanguine about blackout risk. The reason is the relentless plunge in the cost of renewables, which have defied energy experts’ opinions at every turn. The first two graphs in the figure below (from BloombergNEF) show the per-watt generation cost of solar and wind energy from 2020-2020.

The choice between renewables and fossil fuels is often framed as a choice between the economy and the environment, but at this point renewables are winning on both fronts. A report by the International Energy Agency called solar power “the cheapest electricity in history.” While there is geographic variation in costs, the report found that new utility-scale solar projects cost between $30-$60 per-megawatt in the US and Europe, a range below the lower bound of costs for new coal and gas projects. In fact, the cost of new solar projects is similar even to the generation costs for existing coal plants. And there’s no reason to think that renewable costs will not continue to fall, as there are still technological improvements to be made. 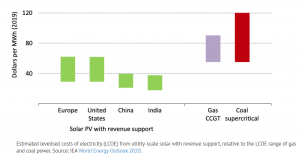 However, the problem with the long-run goal of generating 100% of electricity from renewables is intermittency–the sun is not always shining and the wind is not always blowing. There are two primary ways around this: first, we can store solar/wind energy at sufficient scale so that we can always satisfy energy demand regardless of the time of day or weather. The third graph in Figure 1 above shows that the cost of lithium batteries has also fallen remarkably, but deploying battery capacity necessary to solve the intermittency problem is still a longer-term project.

See also  What You May Have Missed This Week: Nov 28-Dec 2

In the meantime, the second solution is to retain capacity in non-intermittent energy to serve as a “bridge fuel” to prevent blackouts. This would preferably be a low-carbon source like nuclear, or, better yet, geothermal (which I’ve written about before). But another candidate is natural gas, which is the next-cheapest electricity source. However, natural gas prices have recently spiked, causing surging electricity bills across the country (and Europe). The explanations for this are varied and complex, but it is largely due to the global supply chain malaise that is causing shortages of all kinds of goods. Some natural gas is converted into liquid and shipped around the world, and so rising shipping costs and delays are impacting gas prices everywhere.

Fossil fuels are sometimes characterized as the safe and reliable energy choice, but the chaotic natural gas market is the latest demonstration that this is an illusion. Since the OPEC embargo of 1973 quadrupled oil prices practically overnight, oil and gas prices have been extremely volatile and unpredictable. Events like a single attack on oil infrastructure on the other side of the world can send energy markets into a panic. The Iranian government could send oil prices to the sky and strangle the global economy simply by closing the Strait of Hormuz.

An electricity grid fed exclusively from home-grown renewable sources would not be subject to these kinds of shocks. Renewables are thus not only cheaper than fossil fuels, they are the path to a more stable and independent energy future. The new Northwest Power Plan recognizes this. And Montana could be in the early stages of a wave of renewable investment, as the 250-megawatt Pryor Mountain Wind Farm was completed in 2020, and a 750-megawatt wind farm is under construction in Rosebud County.

Nevertheless, according to a recent analysis only 2 of the US’s 3300 utilities are currently on pace to meet the clean energy targets necessary to reach President Biden’s goal of a 50% reduction in carbon emissions from 2005 levels by 2030. Hitting that target will almost certainly require a mix of government standards and incentives, which is currently being debated in congress as part of the “Build Back Better” Act. Analysis of whatever ends up passing (if anything) will likely be the topic of a future post.