Each year, I give ag economy outlook talks across the state. I’m gearing up for those now and hoping the dry roads and warmish weather last a little longer. As a part of those talks I often use a relatively new tool, the Ag Economy Barometer, which is a joint partnership of Purdue University and the CME Group. I think the Ag Economy Barometer is really cool—it gives a sort of “consumer sentiment index”, a bit like that calculated by the University of Michigan–but for farms and ranches.

Often when I bring it up, however, farmers and ranchers in Montana are skeptical. They tell me that they think the survey is too optimistic and focused on agricultural production in the Midwest, where production systems are pretty different from Montana’s. It turns out that is partially true—the survey has a minimum target of 53% of responses from corn and soybean producers in an effort to be nationally representative. (See https://ag.purdue.edu/commercialag/ageconomybarometer/survey-methodology/).

In an effort to get a better idea of what the overall Montana sentiment is, Anton Bekkerman and I asked some similar questions as part of a Montana Wheat and Barley Committee-sponsored survey this summer.  (Anton also wrote about other survey questions in this earlier blog post.)

While the Ag Economy Barometer asks several questions, we only asked two about current and predicted conditions. Our survey was open over the course of the summer and analyzed in August. We compare Montana responses to August Ag Economy Barometer responses. The first question asked producers if their operation was better off, worse off, or about the same in comparison to one year ago. Nearly half of the August Ag Economy Barometer respondents (47%) said they were worse off compared to a year ago.  Only a third of Montana farmers reported being worse off.  But, much of that discrepancy likely relates to Montana’s severe 2017 drought and relatively better production conditions in 2018. Neither our survey nor the Ag Economy Barometer reported a high percentage of respondents stating their operation was better off compared to a year ago—12% and 8%, respectively.  (Ag Economy Barometer numbers in September have changed and do look more pessimistic, but it’s are not good comparison since they were evaluated at a different time than our survey.) 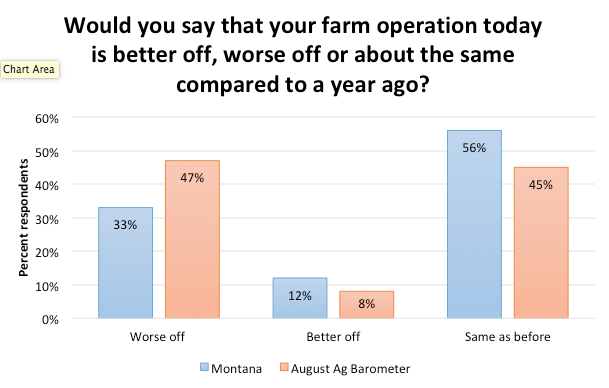 The second question asked about expectations one year into the future. Only 11% of Montana farmers thought their operation would be financially better off compared to 24% of the August Ag Economy Barometer respondents. The largest group in both surveys expected conditions to be about the same. The Ag Economy Barometer hypothesizes that farmers reported with some optimism during August because of USDA’s announcement of an assistance package for farmers impacted by retaliatory tariffs. Our survey was open during the time before and after the announcement of assistance was made, so some respondents would have known about the assistance package while others would not have. Our survey would have picked up on some of the trade and trade retaliation concerns, which became evident earlier during the time the survey was open. 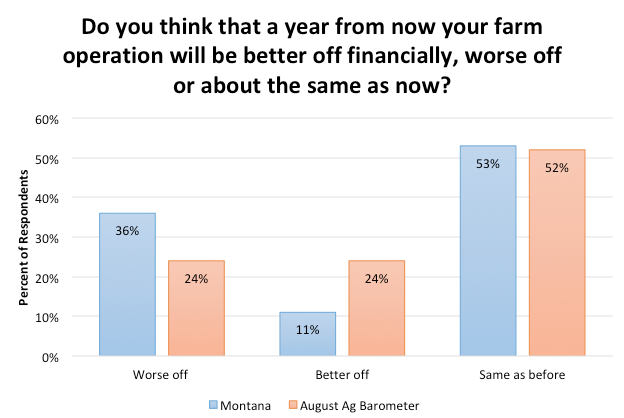 Unlike the Ag Economy Barometer, we don’t collect this information each month, so we can’t compare over time. But this gives us insight as to how the two compare in a snapshot in time. In general, Montana producers were more likely to say things were about the same as they had been, and would continue to stay that way in the near future. It may seem hopeful that relatively few Montana producers reported being or expecting to be worse off than a year ago. But a year ago we were just beginning to recover from some pretty severe drought, so that optimism is tempered.

For further information about the Ag Economy Barometer index, see https://ag.purdue.edu/commercialag/ageconomybarometer/charts/.  For a schedule of Montana economic outlook talks, see http://www.economicoutlookseminar.com/.  (George Haynes and I give the agriculture outlook portion and coverage of other industries and trends is always interesting, too!)

Kate Binzen Fuller is an associate professor and extension specialist in the Department of Agricultural Economics and Economics at Montana State University. She holds an M.S. and Ph.D. from the University of California, Davis. Her extension and research program focuses on the economics of farm management decisions, including USDA programs and policies, pest and disease responses, organic agriculture, and issues surrounding leasing and land values.