Several factors contributed to this decline. First, it important to understand the landowner’s decision.  A landowner considering enrolling land in CRP must evaluate if a parcel of land is eligible for the program. Then they can evaluate the potential returns from enrolling the land in CRP for a ten year period against the potential returns from farming the land.  Inflation adjusted per-acre CRP payments have declined over the past 10 years. Nationally the maximum number of acres allowed into the program has been reduced to 24 million acres for 2017.  This is over 12 million acres less than the number of acres enrolled in 2007. 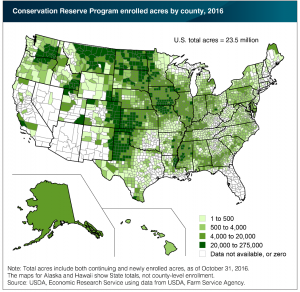 At the same time the program was reducing maximum allowable acres, Montana farmers enjoyed some strong prices for agricultural commodities.  The combination of these factors led many landowners not to re-enroll acres in the program.  Nearly 400,000 acres currently enrolled in CRP will expire in 2017.  Less than 200,000 acres will expire each year from 2018 to 2023.  Montana CRP acres declined by over 200,000 acres in 2014 and 2015 but the decline was only 90,000 acres in 2016.  The lower commodity prices may have contributed to the slowdown in acres leaving the program.

See also  How Much do Governments Subsidize Fossil Fuels?

What does the future hold for the CRP program?  I expect a continued reduction in CRP acres in Montana in 2017.  The amount of the reductions slowed in 2016 and may also be relatively modest in 2017 considering current low commodity prices.  Beyond 2018, potential changes to the program in the next farm bill will determine the long term impact of the program in Montana.  Developing a new farm bill is a long and political process so we’ll just have to wait to see what the future holds for CRP.