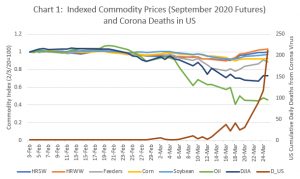 The US had no COVID-19 deaths reported until March 2, even though worldwide deaths exceeded 3,000 deaths by early March.  Since March 2, corona virus related deaths in the US have increased from 6 to over 200 per day (See Chart 1 – red line).

The downward pressure on commodity prices has been most pronounced for feeder cattle and corn prices. Since February 3, feeder cattle futures prices have dropped by 11%.  Feeder cattle futures prices have moved lower partially based on fears the coronavirus will curb U.S. beef consumption by keeping consumers from eating away from home.  In addition, there is some concern that meat packing facilities may face labor shortages due to the COVID-19.  Corn prices have been pressured by lower demand for ethanol as gasoline consumption is expected to decline in the near term.  Although, lower cattle and corn prices should translate in higher export sales over the next few weeks.

Help may be on the way!  Agricultural producers will likely benefit directly from the stimulus package.  The stimulus package would hike the annual borrowing authority for the Commodity Credit Corporation from $30 to $50 billion, which was the source of funds for the Market Facilitation Program.

CME Group was the source for commodity price data.

Wall Street Journal was the source for the Dow Jones Industrial Average.

Johns Hopkins Coronavirus Resource Center was the source for confirmations and deaths.

Dr. Haynes is a professor and extension specialist in the Department of Agricultural Economics and Economics at Montana State University. Dr. Haynes’ primary line of research has been in family business finance, where he has examined the intermingling of family and business resources, explored changes in the financial structure of family business, examined the lending behavior of depository institutions, and assessed the response of family businesses to disasters and disaster assistance. His instructional responsibilities include delivering the Montana agricultural outlook, conducting borrower training for Montana producers, and educating farmers and ranchers on the agricultural policy issues.