Prices in agricultural markets are lower than several years ago. This is likely not new information to anyone.  Cattle prices were at recent highs in 2014 while wheat markets were at recent highs in 2012.  Prices and financial success in agriculture are related but are not the same.  Input costs, yields, government program payments and other factors beyond prices are also important to the Ag sector’s financial success.  Financial ratios are one way to look at the “financial health” of a sector.  USDA’s economic research service reports a variety of interesting charts which can be found here.  Here are few highlights from USDA’s data.

A more important ratio is an operation’s solvency ratio.  This ratio is common calculated as total debt divided by equity.  As indicated in the chart below, the solvency ratios for the Ag sector have been rising since 2012.  The solvency ratio for US Ag operations is at its’ highest level since 2003. However, this level is below the those seen in the 1990s and substantially lower than the peak levels seen in the mid-1980s.  This recent increase does suggest the balance sheets for many Ag operations have been worsening in recent years.

See also  Is the Cattle Futures Market in Chaos? 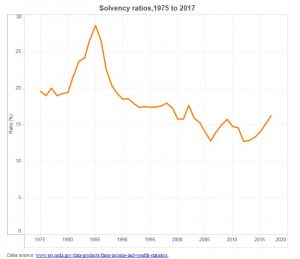 A final chart that caught my eye as I read the USDA report was the summary of lenders operating in the ag sector. As the solvency ratio increases is puts pressure on these agricultural lenders.  The chart below provides a national level look at the different types of agricultural lenders and their total volume of loans. The largest lender is the Farm Credit System (47%), followed by Commercial Banks (38%), Insurance Companies (6%), Individuals & Other Lenders (5%), Farm Service Agency (2%) and Farmer Mac (2%).